“we must not acquiesce with our own enslavement.  We must no longer be bound and gagged, as we are by politicians and their social media joint friends…across the whole western world people are fearful of being force-vaccinated… This forced vaccination is not only repugnant to the written word of our Constitution, it is also against the very spirit of it.”

Data seems to show lock-downs and face masks may be exacerbating COVID-19 deaths. Sweden never locked down or required face masks, but does suggest precautions and provides information to its citizens.

Massive protests in South Korea and Germany have also broken out after the government announced renewed lockdowns and “social distancing” measures as a result of a testing spike in new cases of the 99.8% survival rate disease.

The two-week measures starting Sunday will allow authorities in Seoul and towns in neighboring Gyeonggi province to shut down high-risk facilities such as nightclubs, karaoke rooms, movie theaters and buffet restaurants if they fail to properly enforce preventive measures, including distancing, temperature checks, keeping customer lists and requiring masks.

Fans will once again be banned from professional baseball and soccer just a few weeks after health authorities allowed teams to let in spectators to occupy a portion of seats at each game.”

The COVID death rate, the Infection Fatality Rate, continues to decline as more asymptomatic cases and people with antibodies are discovered.  Questions are being raised over how COVID deaths are counted.  The survival rate of flu is 99.9%.

On August 1st millions of people marched in Germany to protest the lockdowns.

Governments are using the metric of new cases to justify continuing lockdowns and social distancing measures, a silent change in policy which originally asked publics to assist in preventing ICUs from becoming overwhelmed.  Hospital capacity utilization in the US was 70% in mid-July, and the number of COVID hospitalizations has declined since then.

A US congressman said recently that universal mandatory vaccination against COVID was the ultimate goal of governments.  Congressman Thomas Massie (R-KY) said:

“they plan to keep us shut down until there is some kind of vaccine, and then whether it’s compulsory at the federal level, or the state level, or maybe they persuade your employers though another PPP program that you won’t qualify for unless you make your employees get the vaccine, I think that’s their plan.  Somebody convince me that’s not their plan, because there is no logical ending to this other than that.”

Many US doctors, and medical establishments from other countries such as Cuba and Turkey, say they have used the anti-malaria drug hydroxychloroquine, in small doses and with selected patients, and as part of a protocol, with great success.

These countries show a death rate from COVID about 1/5 of the US death rate. 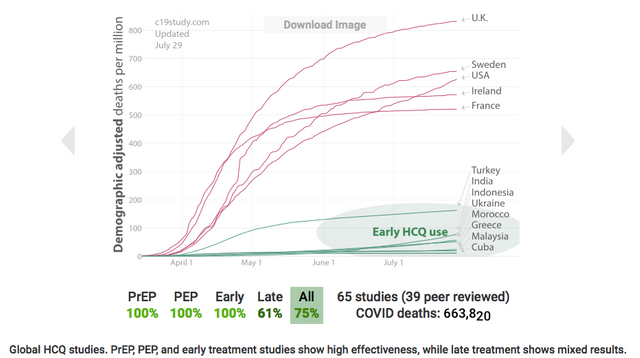 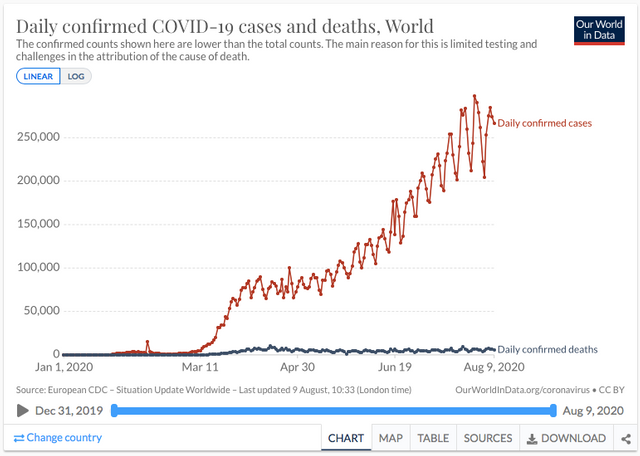 The major media and governments continue to clamp down on rights and the economy based on new cases, in alarmist tones.  The Atlantic wrote on July 9th:

“Cases have soared to terrifying levels since June. Yesterday, the U.S. had 62,000 confirmed cases, an all-time high—and about five times more than the entire continent of Europe. Several U.S. states, including Arizona and Florida, currently have more confirmed cases per capita than any other country in the world.”

The Atlantic and media ignore that the spread of a low fatality rate virus is normal, and quickly results in the human immune system developing antibodies which are more potent and safe than any man-made vaccine.